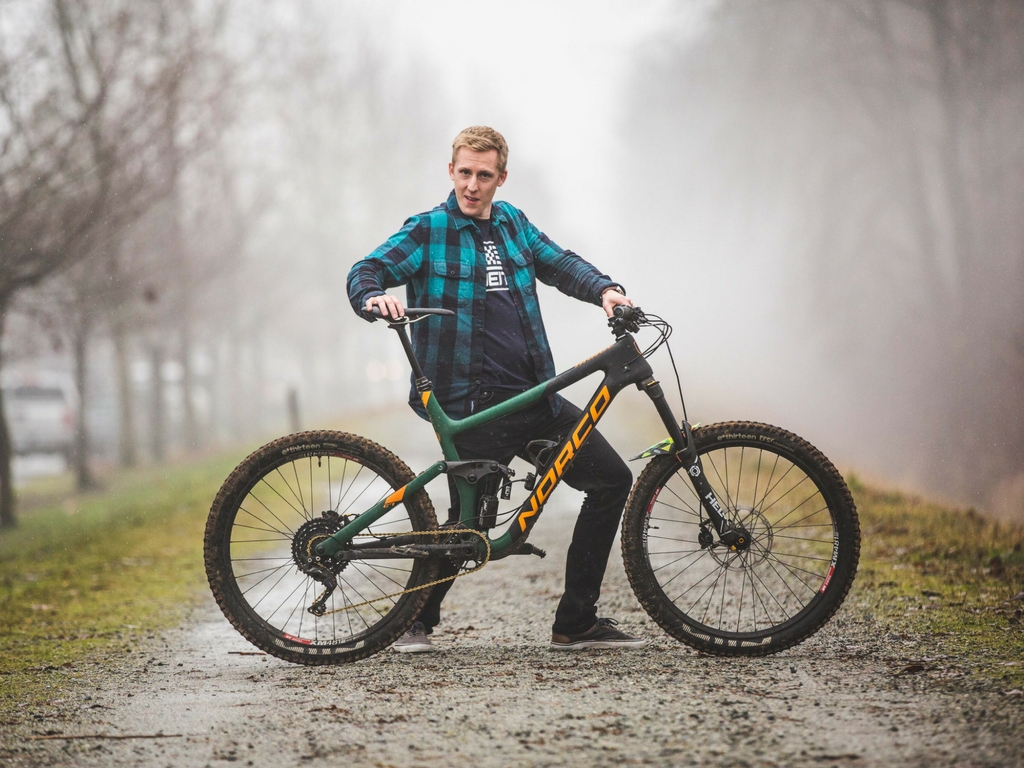 Geoff Scott, a Norco Engineer in charge of projects like the new Scene city bike (and some as-yet-unreleased mountain projects), spends the majority of his free time ripping up and down trails around the office on his custom Norco Range Enduro bike.

Geoff’s bikes don’t tend to stay stock for long. With easy access to the best new mountain bike components on the market the desire to try new components makes every ride a little different. In his tenure on this bike, however, Geoff has identified some components that he just can’t live without.

The Helm fork is Cane Creek’s new, very well-received, long-travel trail fork, designed for riders who really push the limits of what their Enduro bikes can do. The Helm is known for being a laterally stiff, and very supportive alternative to the RockShox Pike and Lyric platforms dominating the market. Geoff has spent a considerable amount of time on the Helm in recent months, and has some positive feedback. 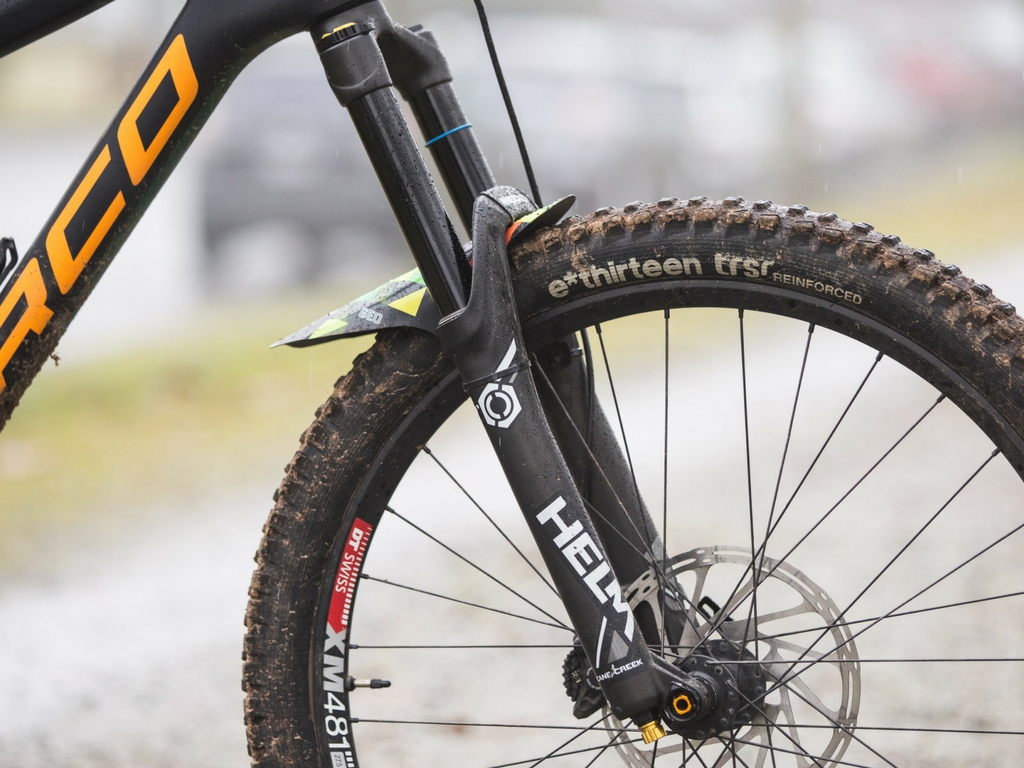 “The Helm isn’t just a rehash of the popular Enduro forks out there right now. It really does have a significantly different feel. The helm offers huge levels of support when charging hard. It seems to always keep the front end up when things go sideways.”
-Geoff Scott

E*Thirteen have been shaking up the mountain bike industry for the past couple of years with their TRS tires and cassettes. In a tire market dominated by big players like Schwalbe, Maxxis, and Continental, e*Thirteen produced one of the most sought-after aggressive tires, and set themselves apart for making tires as grippy as they are tough. On the drivetrain front, the e*Thirteen TRS+ cassette gives riders a wider range option to the big players SRAM and Shimano, proving easier to use, competitively priced and well finished in stealth black. Geoff has been using both the TRS tires and TRS cassette, and is so impressed that he plans to carry them over to his next build.

“The e*Thirteen TRS tires were a real eye-opener for me. I’ve been a Maxxis fanboy for years, but these were as grippy and predictable as any Maxxis with better feeling cornering knobs, making them easier to control and more responsive. I’ve been super impressed.”
-Geoff Scott

Being a self-professed numbers nerd, Geoff’s bike spends an inordinate amount of time with a Quarq ShockWiz onboard, to measure Geoff’s suspension setup(s) and quantify the changes he makes. After letting the ShockWiz guide his initial setup, Geoff will deviate from this baseline tune by changing air pressure, compression and rebound settings, and be able to compare subjective differences with real-world numbers. 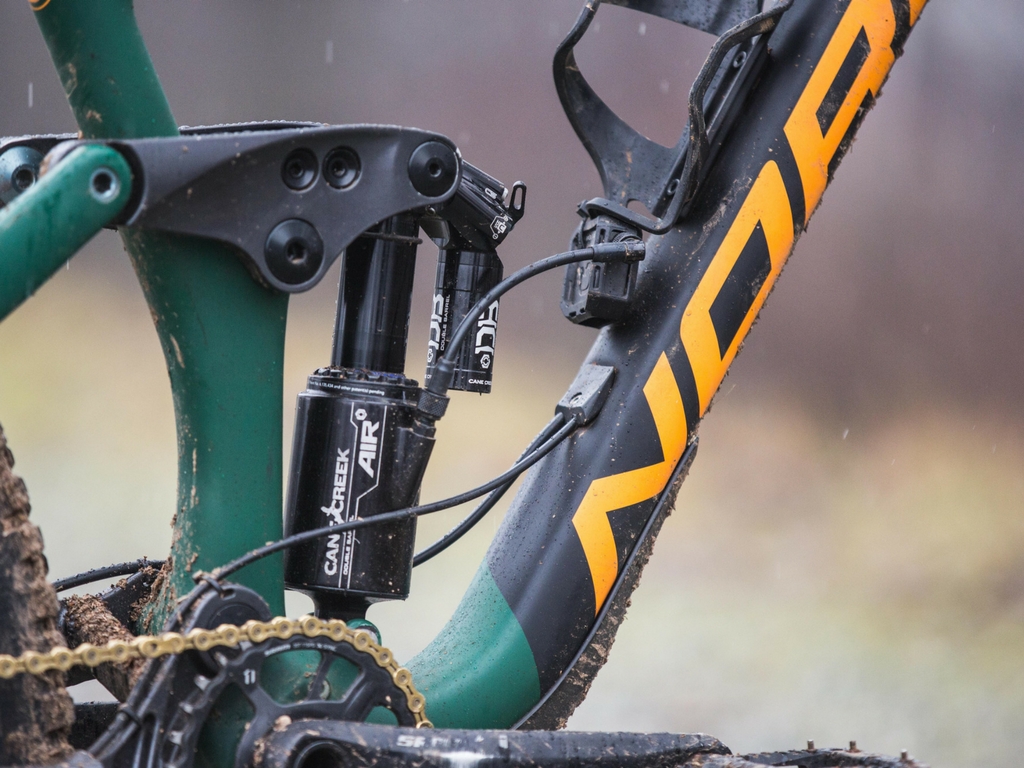 “The result of using the ShockWiz is that I feel much more confident setting baseline tunes to begin evaluating new suspension products. It is also excellent for validating setups for riders who are a bit less sensitive to suspension feel.”
-Geoff Scott

Geoff’s favorite riding spot (his testing ground) is Thornhill in Maple Ridge, British Columbia. The Thornhill trails are known for being high-speed, and a great test of bike setups for those who spend a lot of their summer months riding bike park trails.