Sram has unveiled two new platforms in their arsenal – RED AXS and Eagle AXS – both fully-integrated, wireless, and incredibly simple to use. 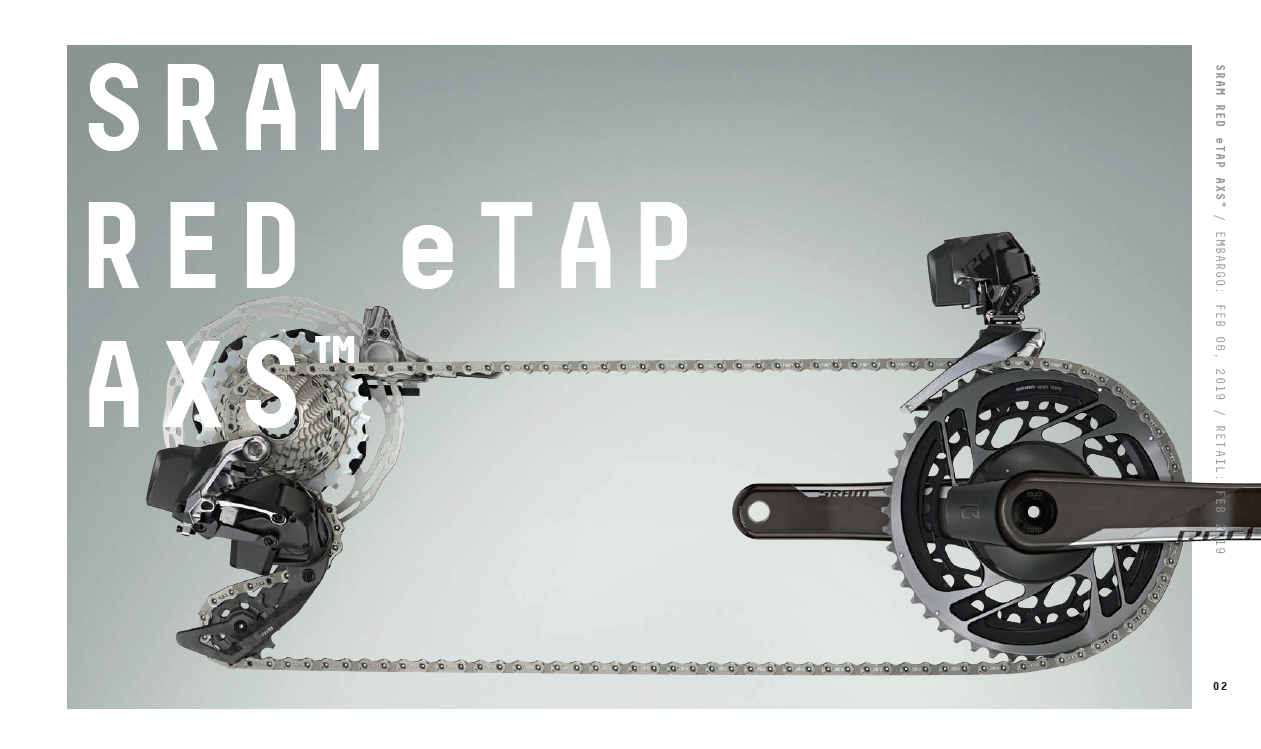 SRAM RED AXS is a road group based on SRAM’s successful E-tap system. Notable upgrades over current e-tap include a larger drivetrain range thanks to the use of an XD hub driver to allow for cassette cogs as small as 10-tooth, a new stronger, quieter chain, and increased personalization from the AXS™ app.

On tarmac or gravel, 1x or 2x, eTap AXS™ gives a quiet, secure, and smooth ride. Orbit™ chain management and a unique Flattop™ chain allows for more confidence and efficiency over virtually any terrain. 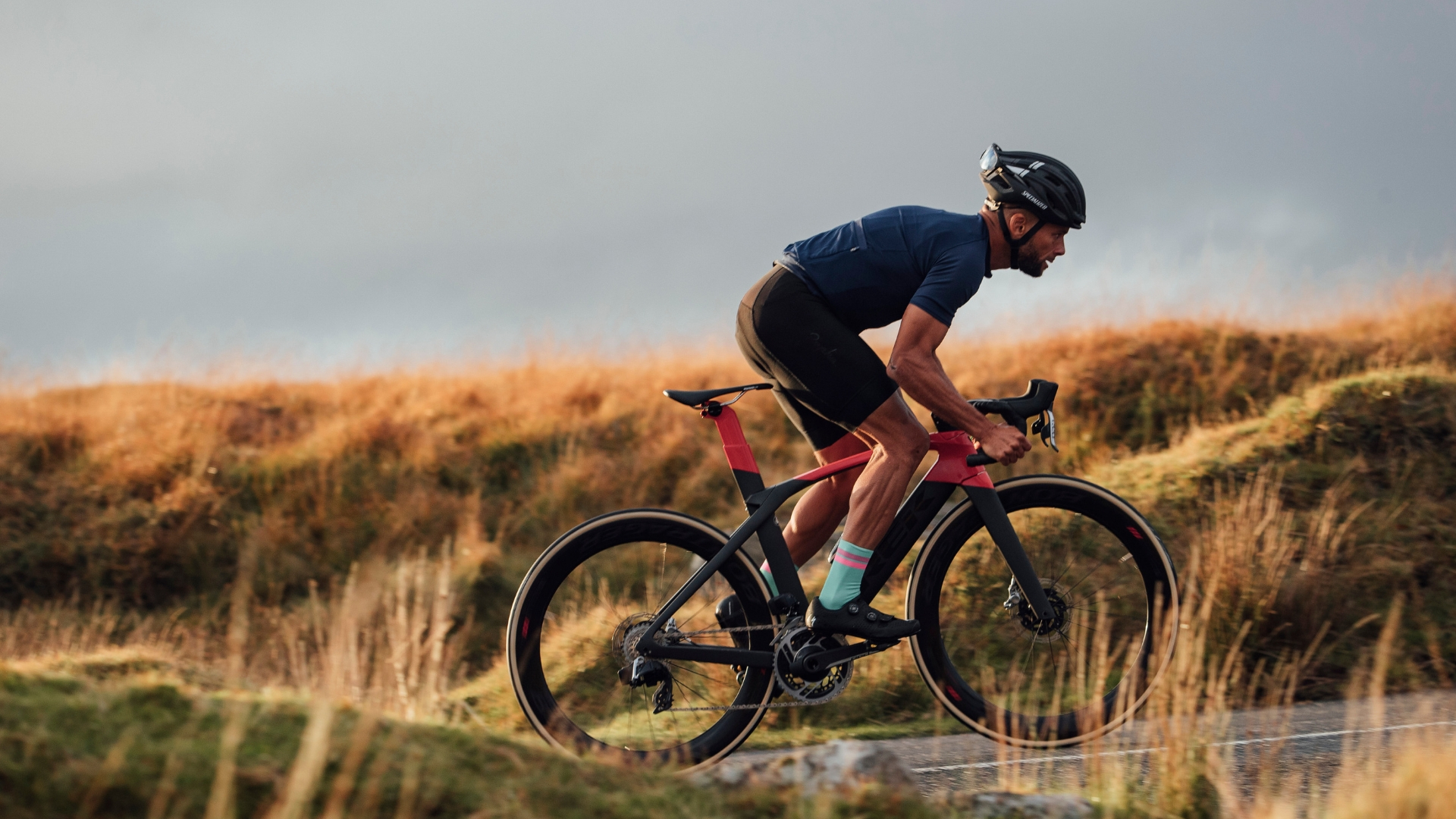 AXS™ allows you to mix and match Road and MTB components, allowing for cool features like dropper post control through a drop bar groupset, ideal for modern gravel and adventure bikes. 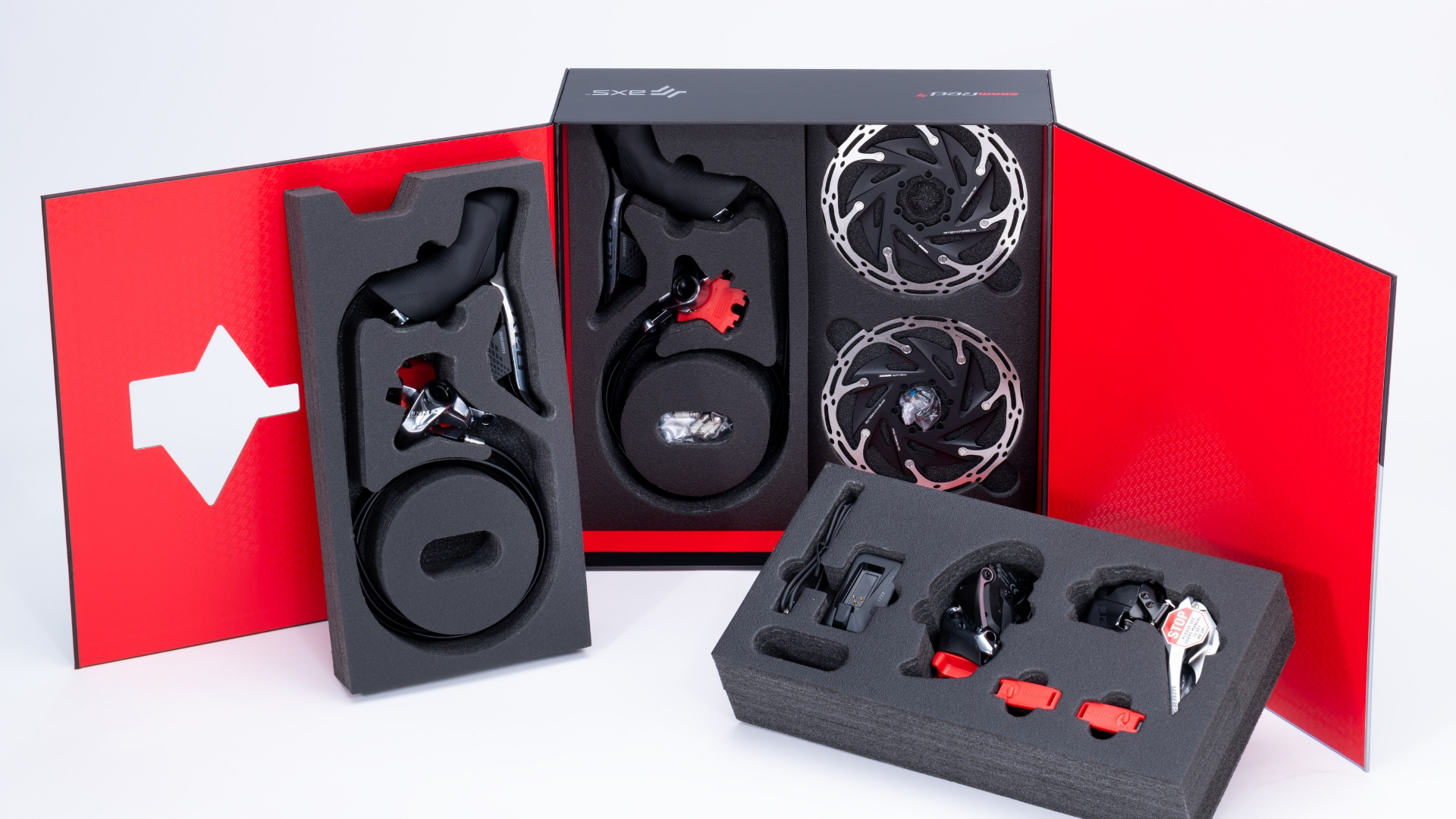 The SRAM RED eTap AXS™ front derailleur leverages advancements with X-Range™ gearing, carving out space for wide rear-tire clearance, and making it a perfect fit for modern riding. The derailleur can be personalized with the AXS™ app, and is compatible with existing eTap® batteries

The SRAM RED eTap AXS™ rear derailleur is AXS™ enabled for easy personalization and designed for both 1x and 2x systems. Advanced chain management keeps
it silent and secure no matter the terrain. The derailleur also comes with larger X-SYNC™ pulleys and ceramic bearings for increased durability and efficiency, and faster motors and signals, for faster shifting.

The unique link shape of the all-new SRAM RED® chain allows the it to be narrower and lighter while increasing strength and providing more space between the outer plates of the chain and the cogs on either side. The result is a quieter chain with faster, more precise shifts. Flattop™ technology enables a narrower chain with quieter operation and increased strength and durability, and new Hard Chrome™ plated inner link plates and rollers reduced wear
and prolong life.

The SRAM RED® crankset leverages a pivotal design innovation: smaller chainrings and a wider cassette range. This leads to smoother and faster shifting up front and more useful gearing for today’s riders. The new configurations improve cadence and efficiency while also delivering shifts that are crisp, clean and quick—every time.

The SRAM RED AXS™ cranks feature reduced chainring size, thanks to increased range from the cassette, and a 13-tooth delta on all chainring pairs, ensuring precise shifting for any setup. This results in more useful gearing and better shifting across all configurations. Power Meter enabled SRAM RED AXS™ cranks are designed with Quarq DZero™ power measurement in the crankset, capable of measuring left and right legs separately. Power readings are accurate within +/-1.5% and aren’t affected by climate conditions during a ride. 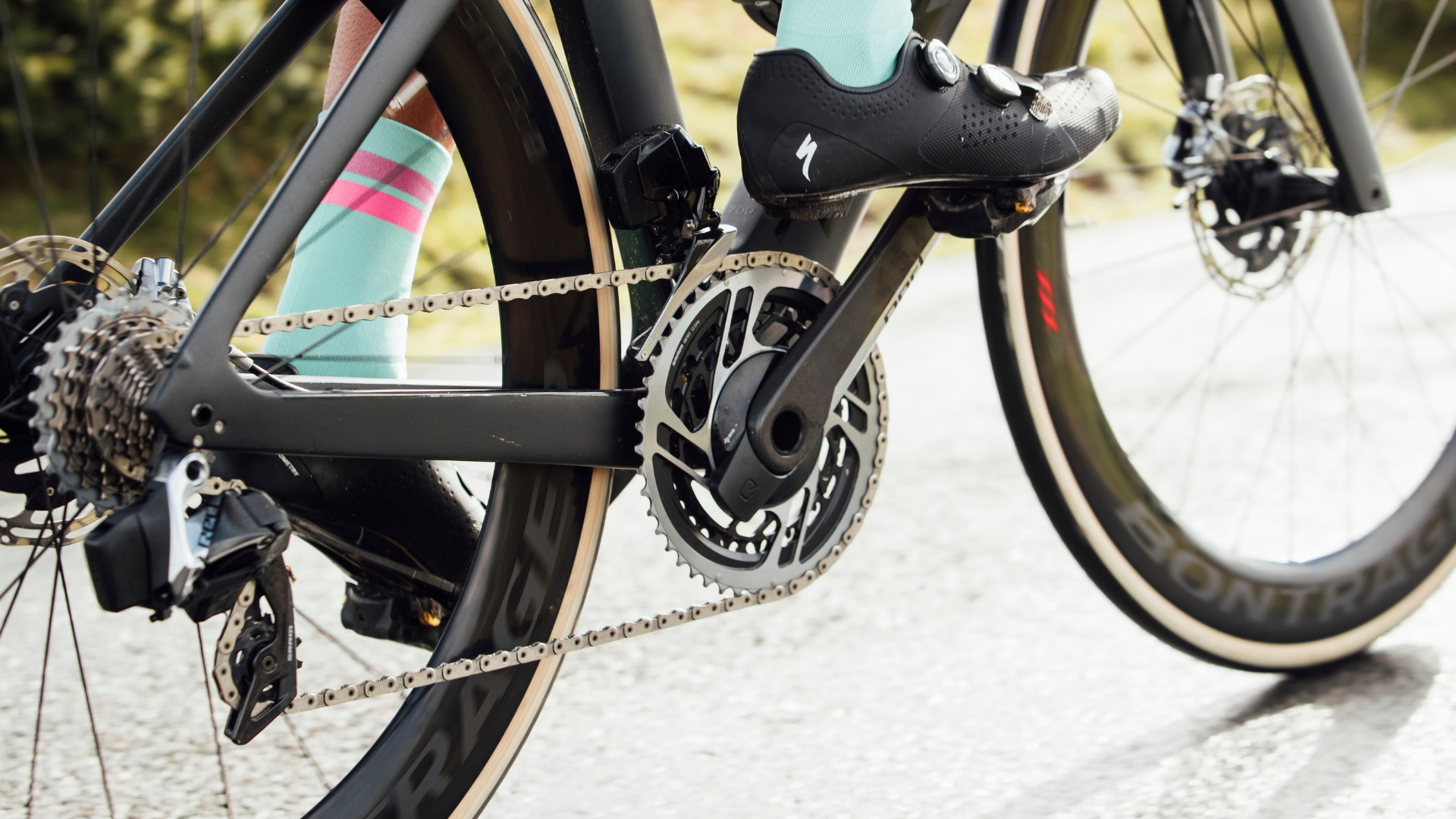 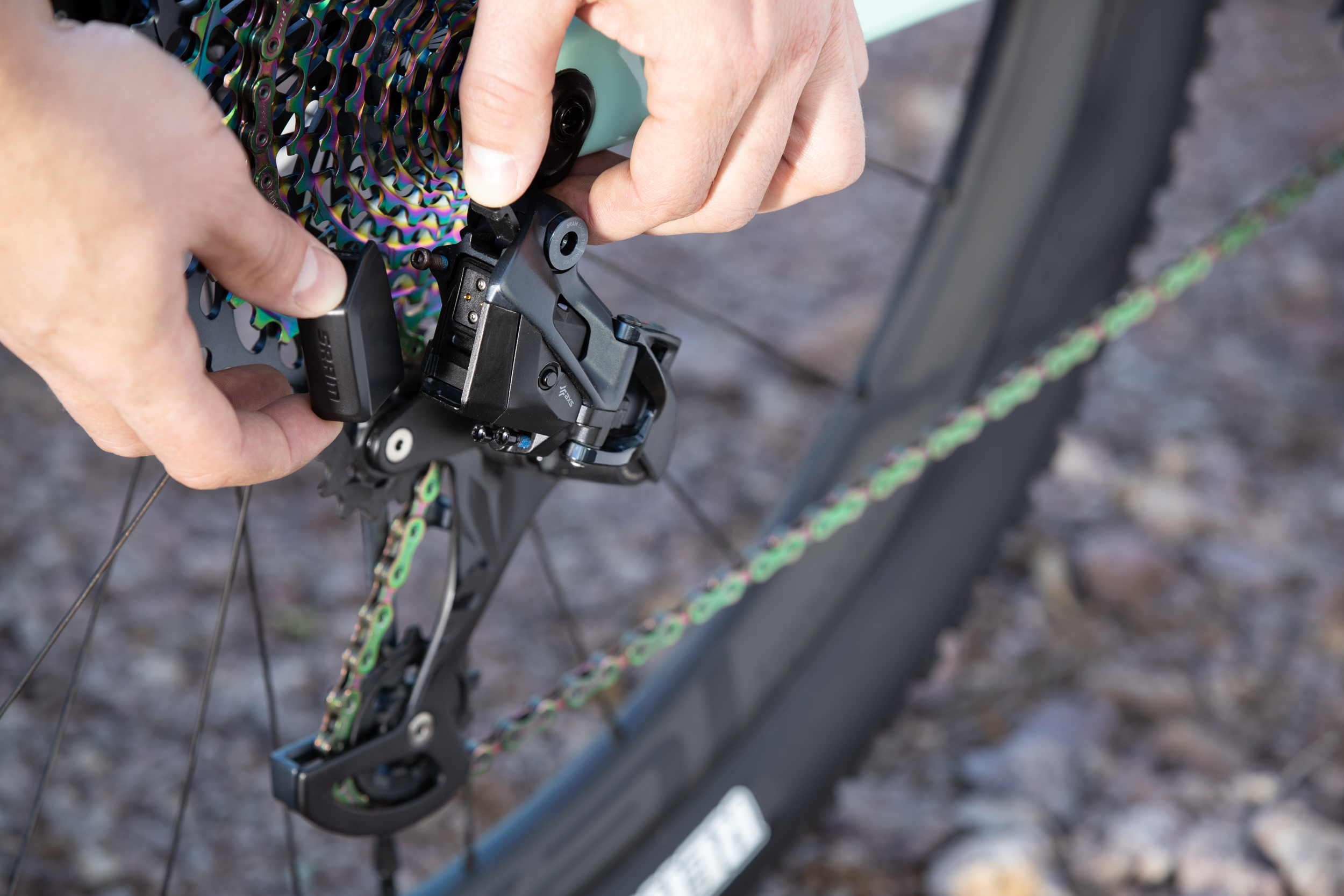 Both XX1 Eagle AXS™ and X01 Eagle AXS™ are based on previous 12-speed Eagle™ technology with the addition of a wireless electronic derailleur and controller. A completely new shifter and all-new derailleur (specifically designed and optimized to be motor-driven instead of cable-actuated), enables customization and scale to an individual rider’s liking via the AXS™ app.

Eagle AXS™ allows riders to shift under load, over the roughest terrain, uphill, or without changing their grip on the bar, thanks to their secret upshift button located by the riders index finger.

SRAM X01 Eagle AXS™ has the same 500-percent gear range of mechanical Eagle, but with a more secure and longer wearing X-SYNC™2 chainring. The resilience of an aluminum cage, paired with the connected components of Eagle AXS™ensures that it will shift predictably and precisely, even under heavy load in rough terrain. 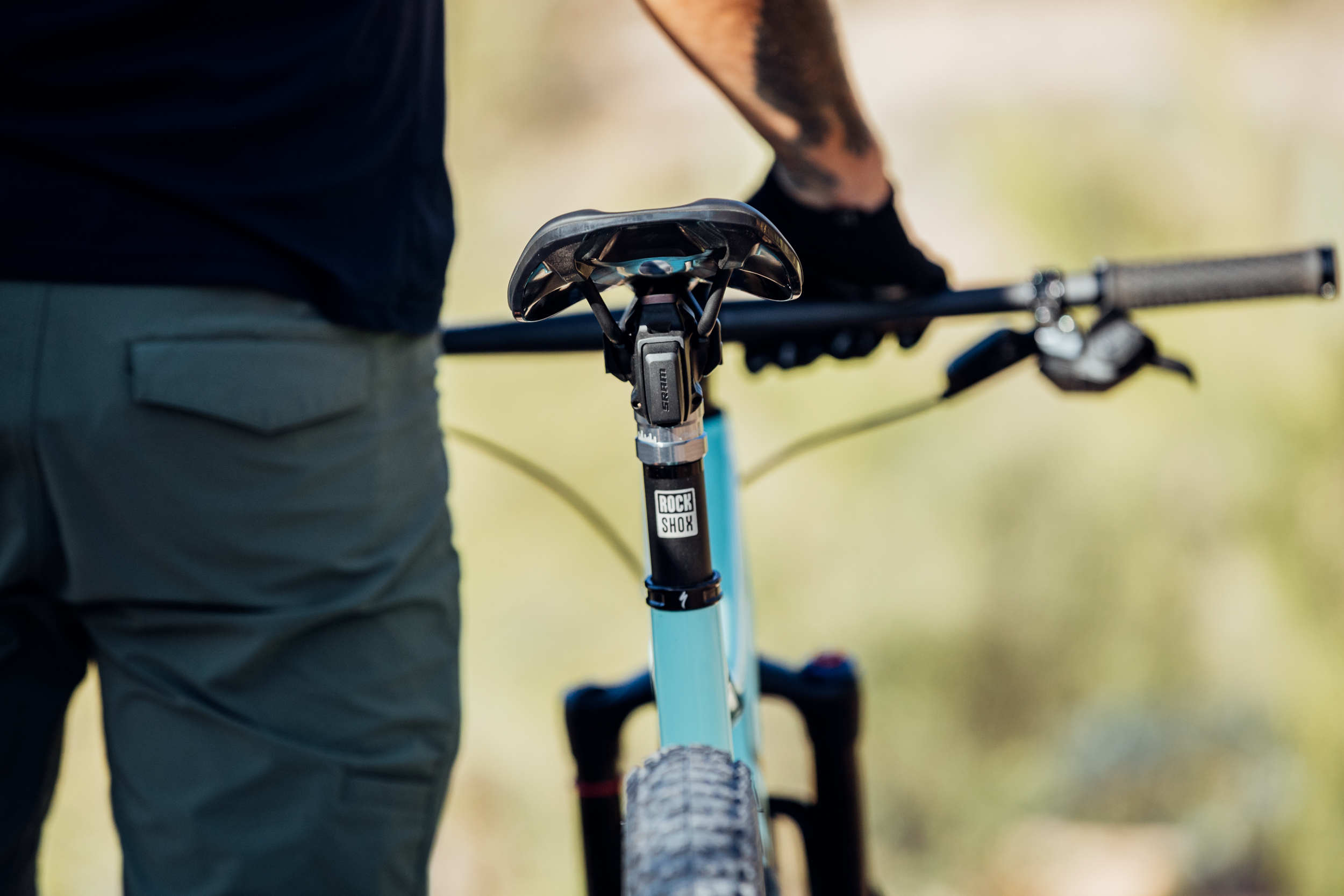 Eagle AXS™ Derailleur
More than a mechanical derailleur with a battery and a motor bolted on, the Eagle AXS™ derailleur is the brain of the whole AXS™ system. From the box, all it requires is limit adjustment and pairing before it is 100% ready to ride. It features a shorter cage for 10mm more ground clearance, with more chain wrap on the cassette to sit slightly further forward, and further inboard from mechanical Eagle™.

Eagle AXS™ Controller
The elimination of cable, housing and wires allows SRAM engineers to design a completely new shifting experience with ergonomic touchpoints that operate from a light press. When paired with the (optional) AXS™ app, riders can reassign button functions to create their ideal shifting (and dropper-post actuation) system. The AXS™ Secret Sprint Paddle, oriented on the front-side of the controller near the rider’s index knuckle, allows for quick shifts with virtually no change to hand position, ideal for use in sprints. 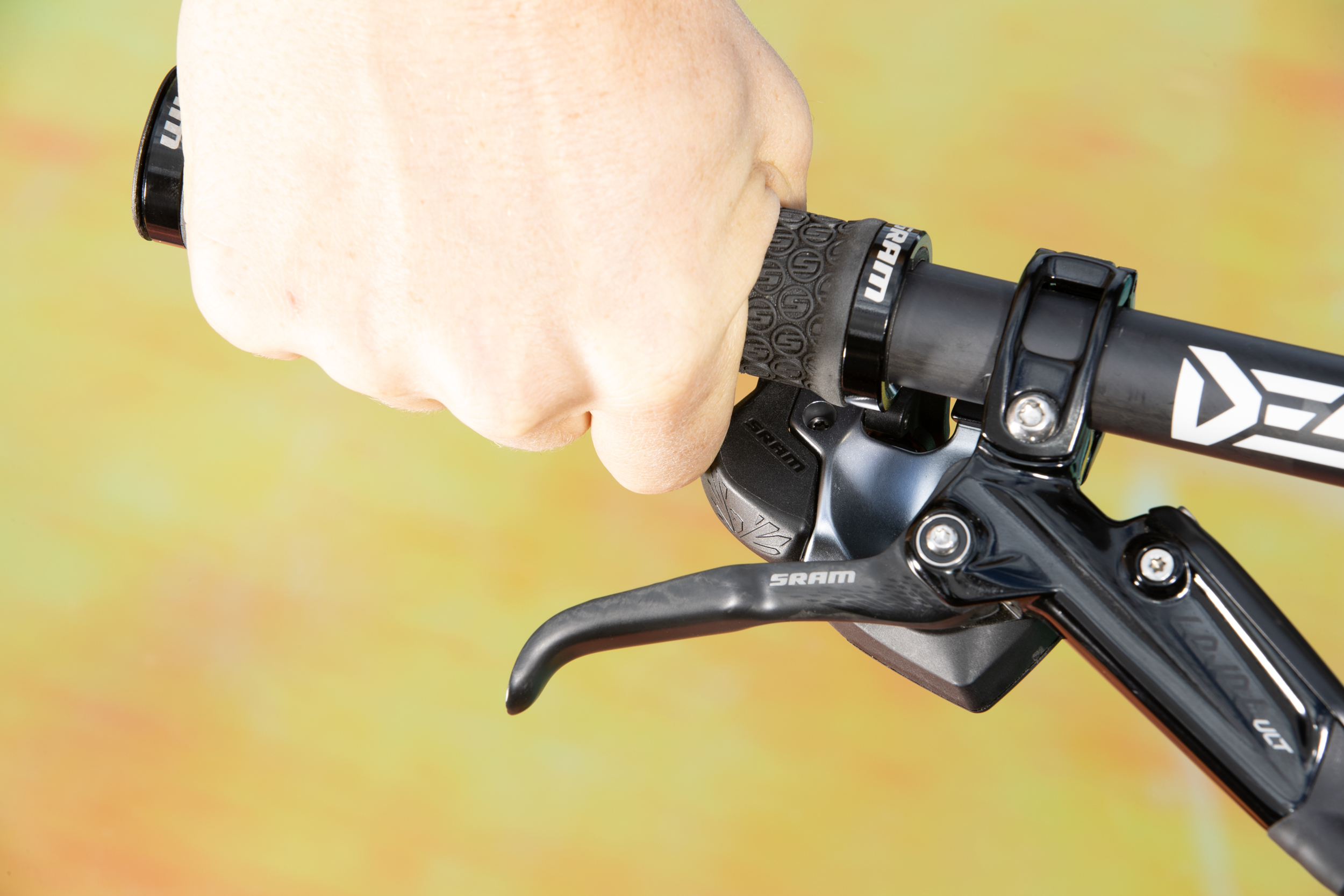 Bolt it on, set three limit screws, press the pairing buttons, and go. Eagle AXS™ is trimmed and adjusted electronically for a perfect chainline, meaning that there is no additional effort to shift or idiosyncrasies to learn.

The Eagle AXS™ uses a removable battery for easy recharging after 20 hours of ride time. The battery weighs 25g and is detachable with a single clip. The battery is compatible with the Reverb AXS™ seatpost and SRAM RED or Force eTap AXS™ road group, and it only takes an hour to charge. Battery life can be checked on the app, or by pressing the button on the derailleur, where an indicator light provides charge level information. To prolong battery life, the system goes to power save mode when the bike is stationery.

The AXS™ app makes it possible to both program and personalize Eagle AXS™ to rider specifications, allowing for adjustments and personalized controller assignments for shift and  Reverb™ commands from a mobile device. The app is not necessary for AXS to function; it is only needed for further personalization or to gain access to the data the system has accumulated.

SRAM AXS™ Road and Mountain groups will be available soon through your local Live to Play Sports dealer! Preorder yours today!